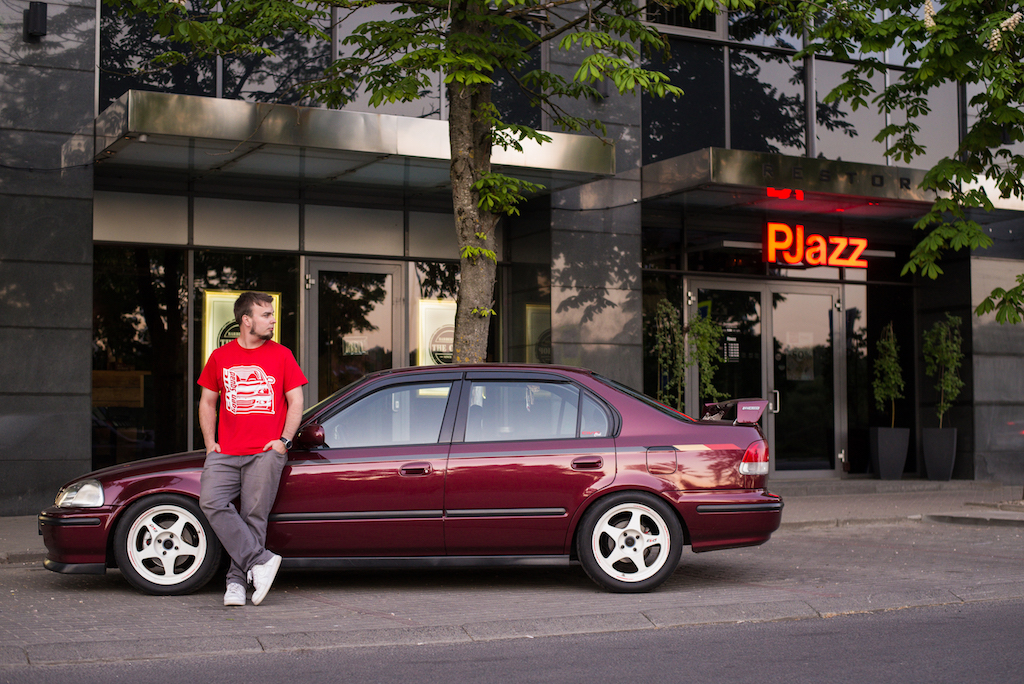 When writing a car feature, you should start by knowing a lot about a car, and people, that made it what it is. What better way to do it, than writing about your own car?

Hi, i’m one of the guys, who run Sickdecal.com, and let’s talk about my EK sedan. For those, who don’t know Honda’s by heart – it’s the sixth generation Civic. It’s the real deal VTi model, so it came out the factory with a B16A2 (1.6l 160Hp and somewhere around 10Nm), which was the biggest engine you could get in Europe. It has a different interior, than a non-VTi models, also disc brakes all around, and all other factory goodies like a front strut brace. 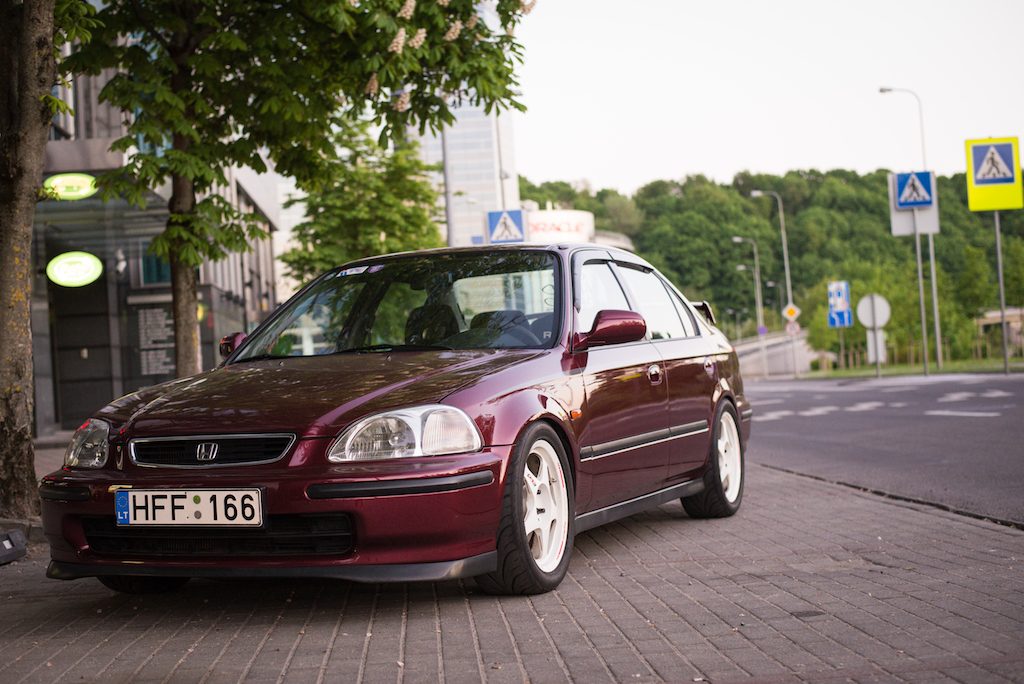 As a Honda kid, i had a bunch of Civic’s back in the day, and a bought this EK4 as a daily, which was a very refreshing experience after a short and terrible experience with a Honda diesel engines. After dailying the EK for a season, the winter came, and where i live – that means snow and salts on the road. I couldn’t live with myself if i would make this car, that’s becoming quite rare nowadays, go through such a treacherous conditions, so i sold my EF sedan, and this EK became my weekend toy.

I had some track experience with a fully gutted EG, and my fair bit of stance with my EF, so i wanted for this fourdoor to be something in between – a car, that has enough comfort features so it wouldn’t be undriveable, but also have enough performance to put a smile on my face, after blasting down a country road. So the whole interior, stereo, a/c, and other oem stuff remained, but i made some small additions – driver seat was replaced with a Recaro Pole Position bucket, Nardi steering wheel, Buddyclub shift knob, some mechanical Omori gauges and a set of Honda S2000 pedal covers. 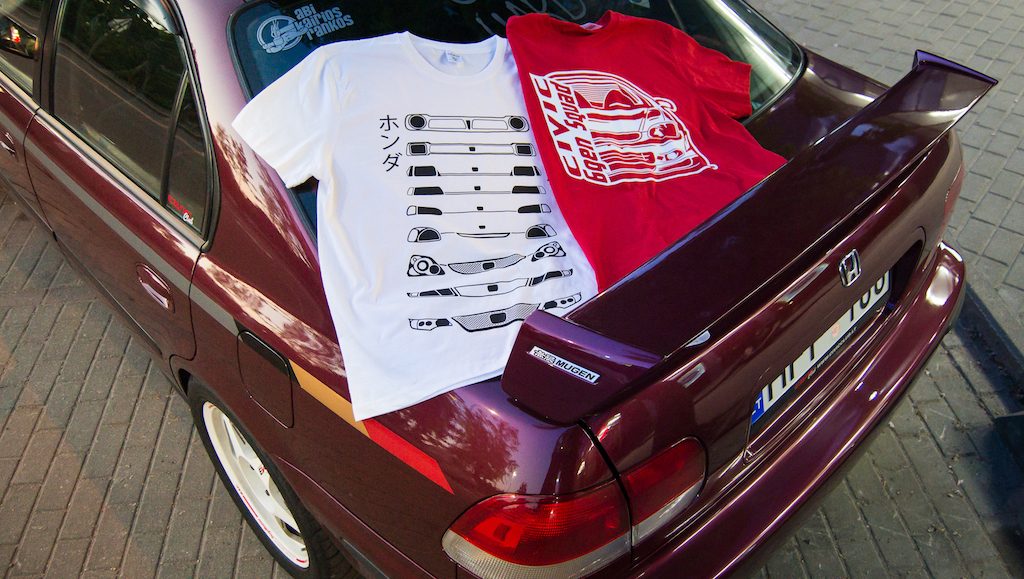 Let’s talk about my favorite part of the car – the wheels. I’ve had quite a number of different wheels, but finally i found one of my favorites – Desmond Regamasters. They are 16×7, +35, 4×100 and wrapped in a set of fat 205/50 Federal RS-R semi slicks. The suspension is being dealt by Buddyclub N+ spec coilovers, oldschool M-Factory camber and toe arms with spherical bearings, a 98Spec JDM ITR rear sway-bar with a subframe brace, and front and rear ITR tower bars. 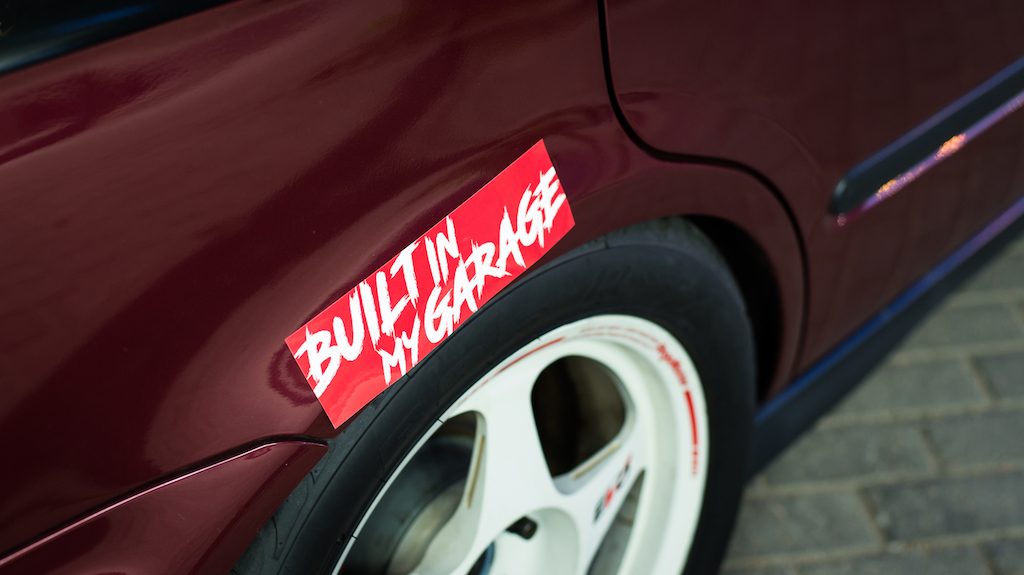 Engine is left pretty much stock – the B16 is helped out a bit by a Integra Type-R intake box, Tanabe exhaust manifold, Mugen B-Pipe and Buddyclub Race Spec back box.

Let’s talk about the exterior – one of my favorite things about it – genuine Mugen wing and my interpretation of Mugen pin stripe. There are also a set of OEM JDM window visors, red-white rear lights, and SiR front lip.

I’ve had it for more than four years, and managed not to crash it, and even have some amazing road trip’s to Glossglockner mountain pass, Nurburgring Nordschleife and it’s still in one piece!

So that’s about it about my little Civic (or P.O.S., whatever you prefer). Next time we’ll talk about something with more torque than a bicycle!

We use cookies to ensure that we give you the best experience on our website. If you continue to use this site we will assume that you are happy with it.Ok